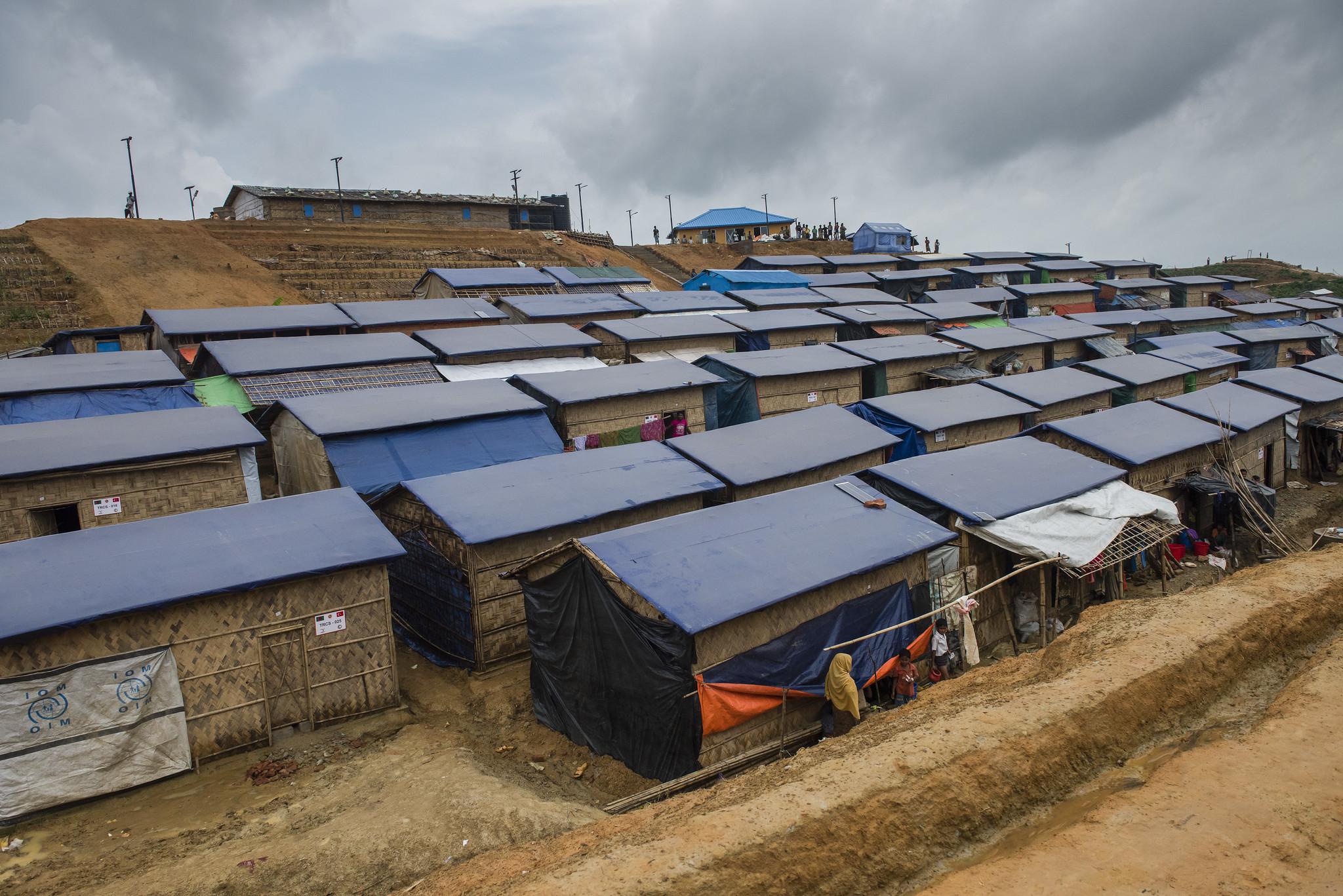 The Kutupalong refugee camp is the largest on earth by population, with around 600,000 people and more than 190,000 families, which exceeds 860,000 inhabitants if the neighboring camps are taken into account, often under the name of Kutupalong. What is this informal camp that started taking in refugees three decades ago?

The Rohingya people: history and origin of Kutupalong

In order to understand Kutupalong, one has to have an understanding of the Rohingya people, a stateless Muslim ethnic minority group that used to reside in Arakan, a narrow coastal strip of land to the east of Burma, which was never recognized as a region.

This ethnic group is estimated to have a population of 1.4 million in the country. However, the Burmese government never recognized the citizens of this town and, in fact, in 1982, the 'Burma Citizenship Law,' (which divides citizens into three categories) flatly rejected any request by the Rohingya people.

Just before the dictator Than Shwe took power in 1982, when violence against the Rohingya people grew notoriously. The 'Operation Clean and Beautiful Nation' (1991-1992) was a state instrument directly intended to perpetrate genocide against the Rohingya people. That is when Kutupalong emerged as a refuge on the other side of the Burmese border, in Bangladeshi territory.

In 2012, while the country's "democratization" was in full swing, the Buddhist monk Ashin Wirathu led the 969 movement, an anti-Muslim movement that used the Rohingya Muslims as the country's scapegoat, forcing 150,000 of them to flee the country and since then the trickle has been continuous, with two major migrations.

The 2017 migration to Kutupalong was the most significant. The Burmese violence against the Rohingya people was such that 800,000 people arrived at the refugee camp. The camp had to be extended on numerous occasions, and the satellite view of the camp is even more astonishing. 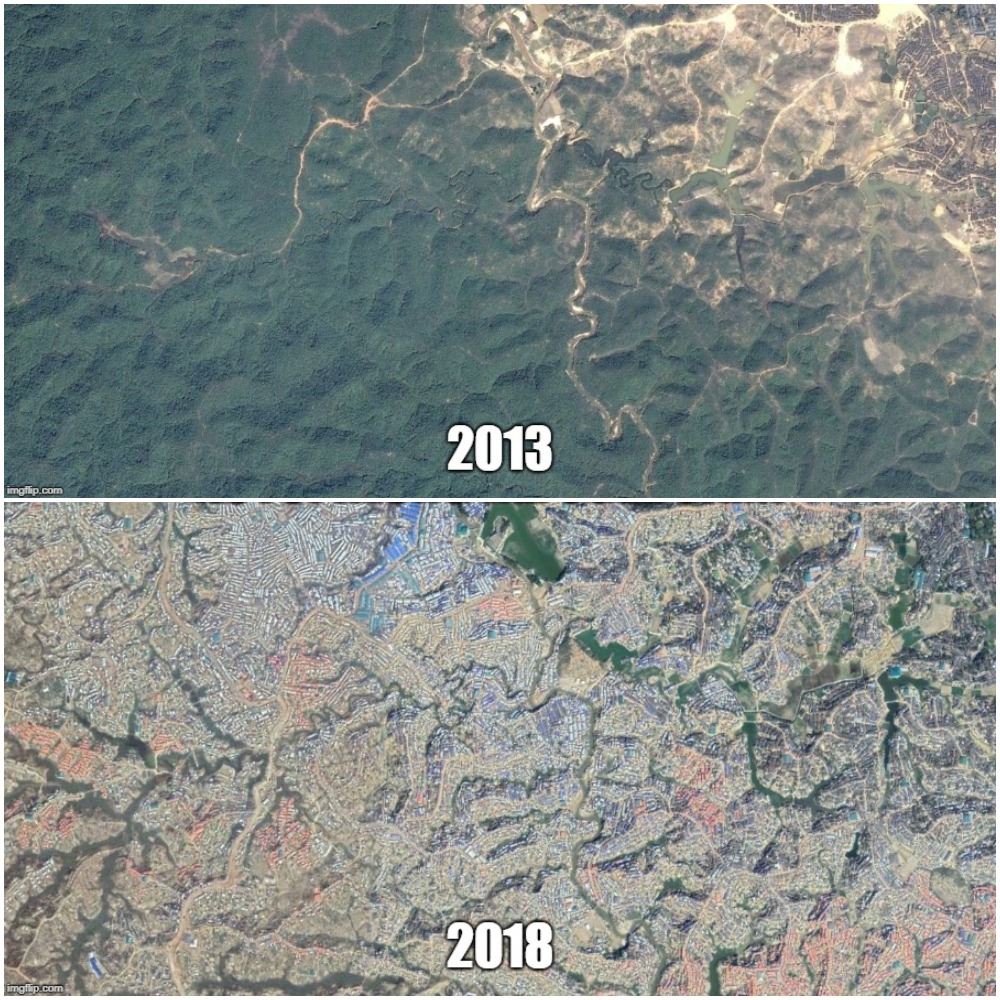 Is there any form of urban planning in Kutupalong?

Although the Bangladesh government has been trying to resolve the urban planning issue of Kutupalong for decades, the continuous pressure and constant flow of Rohingya refugees, makes the task practically impossible. This government has left the door open to the Rohingya people, under the promise that could take shelter "for as long as they want to", although living conditions are horrendous.

Since urban planning is not possible, Kutupalong often floods. Numerous times each year, the floods destroy many of the homes that are made from wood and cane. In 2018, Human Rights Watch insisted on moving the population to a safer area with more solid structures, if possible with water and a sewerage system.

Kutupalong's urban planning, or lack thereof, consists of low rise houses and extended families located on a floodplain that is often covered with mud. There is no access to municipal services such as schools or hospitals, certainly not provided by the Bangladeshi authorities, which in fact tends to close informal schools. Official schools are run by UNICEF and Médecins Sans Frontières have numerous healthcare posts.

Since there are no emergency services such as fire services either, fires often destroy the homes along with everything in their path. The most recent major fire, in March 2022, affected 66% of the population of camps 9, 10, 8E and 8W. Because, indeed, the camp is sectorized in order to manage it.

The camp that became a city

One of these sectors is the 2020 Camp 4 Extension, and it is one of the most important spaces in terms of the future of the camp. In it, a small team of workers is designing what could be a future city. Using steel and bamboo, the first houses are being built, which are of various heights. Apart from being safer, they take up less space and allow densification, which frees up land and reduces overcrowding. 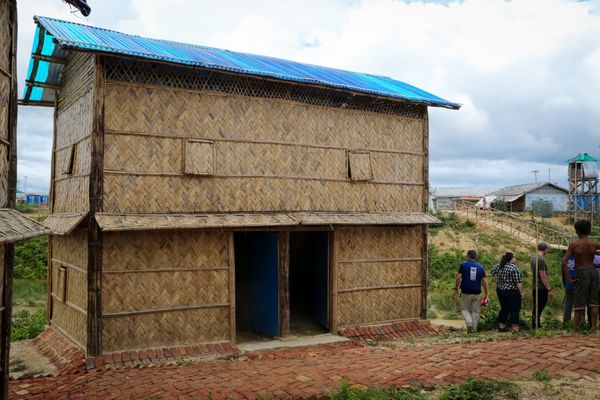 It is not the only significant improvement. In 2018, the local distribution of liquefied petroleum gas (LPG) began, which is cleaner than burning coal or wood. In addition, a few years ago some underground channels were put in to help with hygiene and, in 2019, a wastewater plant capable of processing waste of 150,000 people was installed. Many of the Rohingya people no longer consider themselves to be refugees, but rather residents of the new city.

In the Camp 4 Extension, many of the mud pathways have been paved and living conditions have clearly improved. However, the Bangladesh government has forbidden the construction of permanent dwellings (this is why the image above shows a 'temporary' removable house and insists that the Rohingya people will return to Burma. Of course, the families do not want to return to a country that exterminates them. They are trapped. 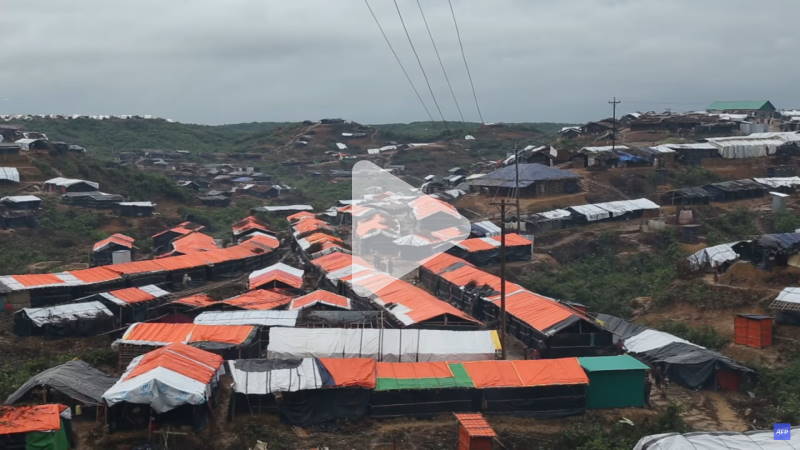 The damage to Kutupalong's ecosystem

Kutupalong is expanding as an extension of mud that was once a relatively dense forested area. As is often the case with explosive growth or with low-density growth, the environmental impact of this camp is high. It has already destroyed almost the entire vegetation in the area, either to make room for the camp or to extract energy from the trunks.

That is not the only impact. Kutupalong is built on the migratory route of the Asian elephants (Elephas maximus), an endangered species. The presence of around one million people not only jeopardizes the elephants. They are territorial animals, and there have already been reports of numerous attacks and at least 13 people have died among the Rohingya community. And the elephants have been attacked too.

Mass deforestation is leaving the entire region unprotected, which is now more vulnerable to phenomena such as flash floods, desertification or deluges The soil cracks beneath the weight of the camp and it is incapable of filtering water. The few wells that are still in use are being overexploited and this extraction of ground water is now affecting the local vegetation. It is a highly unsustainable model.

Given the Burmese persecution of the Rohingya people who live under the threat of genocide, it is highly unlikely that camps such as Kutupalong will be dismantled any time soon. It seems likely that this stateless town will have to find land on which to prosper and to do so, they require urgent international help.