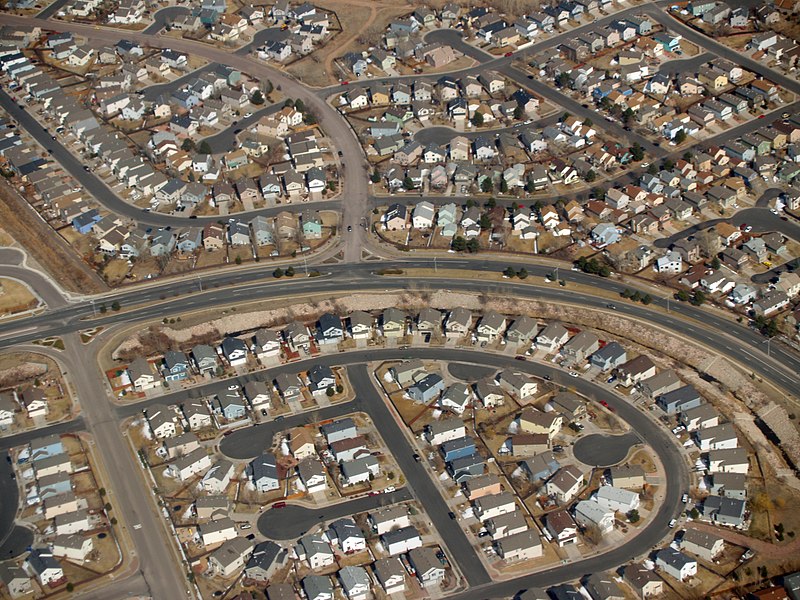 Urban sprawl is one of the major problems of human communities today. Despite academic consensus in favor of human scale, walkable and mixed-use accessible cities, urban densities are reducing at a global level. This has significant negative impacts.

What is urban sprawl?

Urban sprawl is a phenomenon involving the outward expansion of urban development across a territory. This expansive form of building is characterized by low density, high commuting times, low economic feasibility and an enormous environmental impact. However, in many countries it is not legal to build any other type of city.

How can urban sprawl be measured?

The best variable for measuring the outward expansion of the urban landscape is through population density, that is, how many people live in one square kilometer. Urban sprawl is characterized by low density, often by a conurbation of single-family dwellings, higher land-uptake per person and an increased automobile dependence, together with greater overcrowding.

Why is urban sprawl on the rise?

The main reason behind the increase in urban sprawl in the past has been convenient transport and speed. The first American suburban developments emerged with the arrival of the railway line, but they faded away with the sprawl that came with automobiles.

There is nothing better to favor urban sprawl that cheap fuel, a commitment to private transport and the infrastructure for the latter. In fact, the construction of roads and freeways is one of the most relevant causes of sprawling cities.

For urban sprawl to occur, a strong institutional support for zoned and not mixed urban planning is required, i.e., urban planning in which human activities are separated from one another and, therefore, everything is located a distance from the area classified as residential. 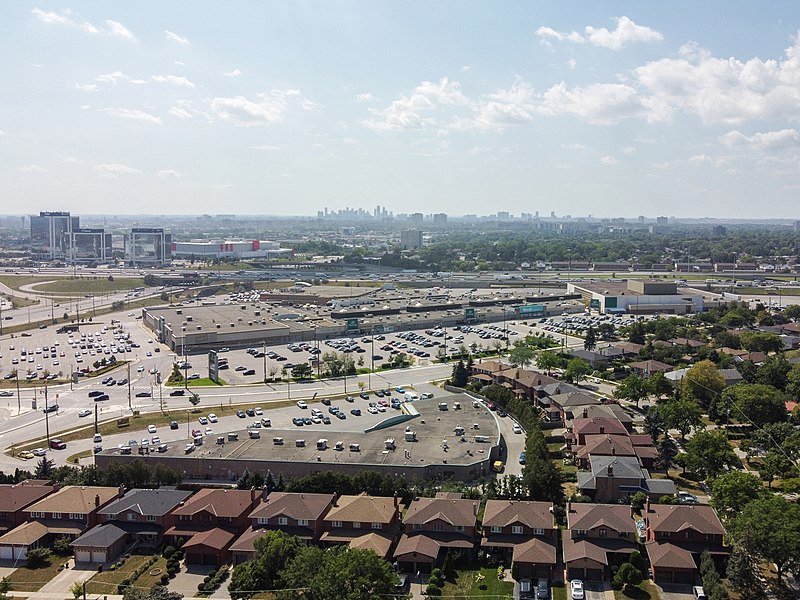 The terrible consequences of urban sprawl

The urban sprawl phenomenon has socio-economic and environmental impacts that cannot be ignored. It is, by far, the worst form of urbanizing from practically any point of view. Unfortunately, it follows the path dependency and socio-technical blockage mechanism: it forces people to use cars. As Rollie Williams in Climate Town explains, suburbanism is a predominantly selfish approach.

The greatest adverse effect of urban sprawl is the negative impact on nature and against biodiversity. Not only farming land is displaced with the sprawl, but natural areas are destroyed as well.

This disrupts the balance of the ecosystem, leading to a lack of soil permeability, aquifer depletion, food chain disruptions, reduction of natural carbon sinks, etc. 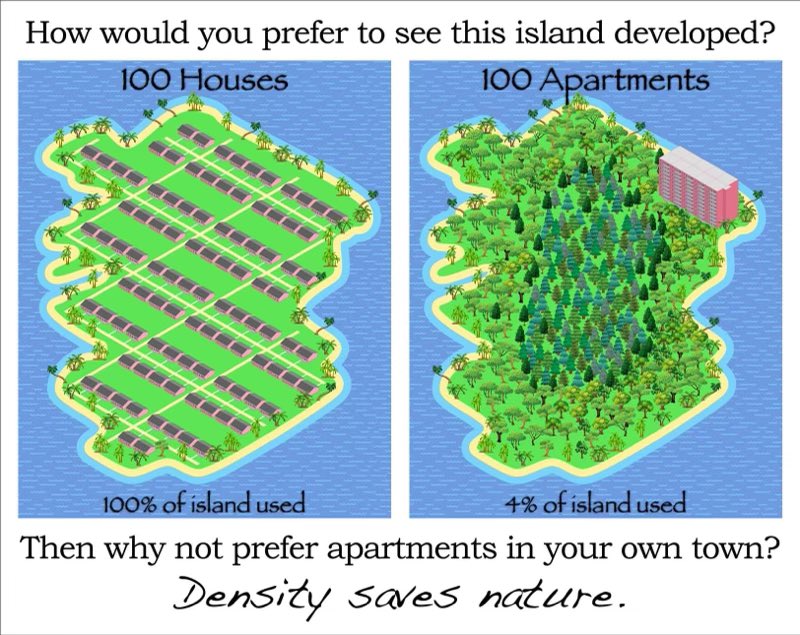 Urban sprawl through single-dwelling housing is not economically sustainable and it is being subsidized by the states. Since this form of urban development uses a higher number of resources and infrastructures, it is not feasible to cover it with taxes, and cities are constantly insolvent or have to be rescued. As illustrated by Strong Towns, the situation is that mixed high-density zones are subsidizing single-dwelling housing zones.

Increased use of fossil fuels and energy in mobility

The degree to which a territory is extended or fragmented is directly related to the amount of energy and fuel it uses to get around. The graph below shows the energy use with regard to urban density. As one moves from more to less density (towards the left), not only the energy per capita increases, but also the emissions per capita. 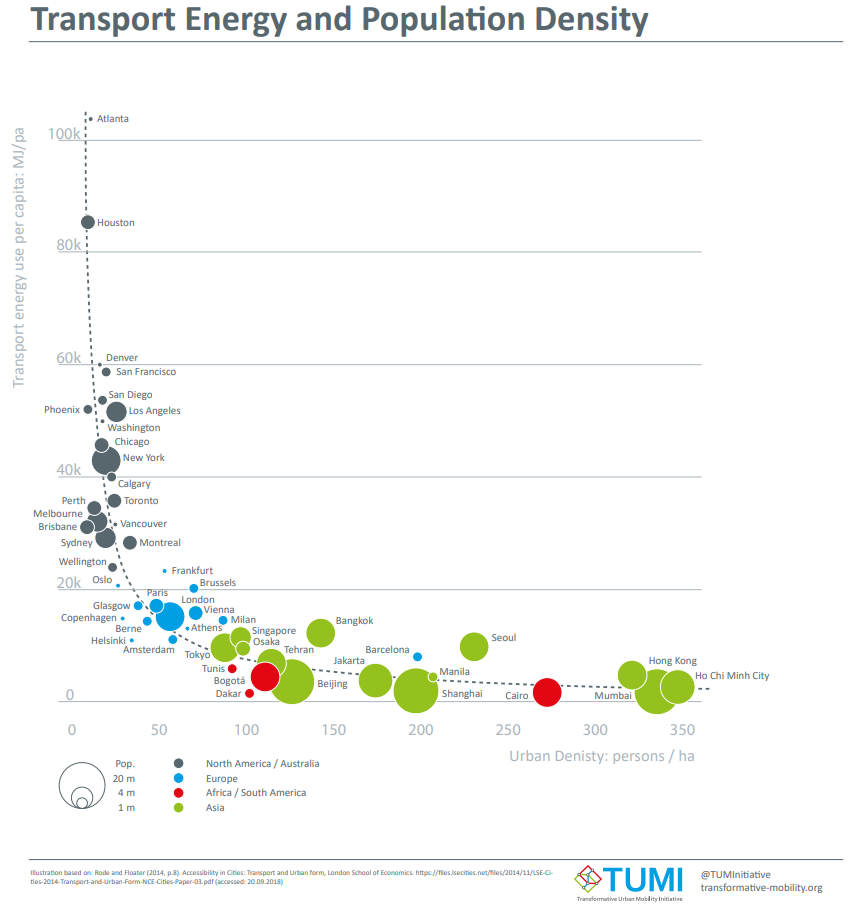 In her book 'Feminist urbanism', Col-lectiu Punt 6 alleges the lack of freedom women had during the first wave of car-driven suburbia in the U.S., as women were literally trapped in their homes. This has not changed. The form of single-family dwellings in residential developments works as a social isolation mechanism leading to lack of individual autonomy.

Urban sprawl leaves behind the young and the old without driving licenses, but also low-income people or women. In fact, it has been shown to be a mechanism used by the rich to avoid coexisting with different ethnic groups, increasing segregation and social stratification. This is particularly true in gated communities.

People with reduced mobility or some form of disability also find it hard to leave their homes. Urban sprawl is a mechanism that goes against social inclusion.

Given the extremely high dependency on private vehicles, urban sprawl is associated with worse quality of life on all fronts. This includes increased air pollution and more sedentary lifestyles. Furthermore, the lack of public spending on social infrastructures prevents the creation of new health centers, which become unfeasible.

Urban sprawl is directly associated with obesity and high blood pressure, however, it also affects the health of its residents. When residents of suburban areas travel each day from their commuter towns to their workplace in their cars, they take with them to dense cities pollution, noise and other negative external factors. Hence the need for LEZ and car-free zones.

It also fosters overcrowding, as there are fewer square meters per person needing homes. Although it may not seem logical, overcrowding caused by low density accelerated the spread of COVID-19 and made these sprawling neighborhoods more vulnerable.

What can cities do to avoid the sprawl?

In a recent City Beautiful video, the urbanist Dave Amos explains the possibility of creating boundaries in cities so they cannot expand outwards. This strategy works, but in order to implement it, certain aspects need to be fulfilled:

There is no doubt that there is absolute consensus in this regard, we need towns to be: relatively dense, not too extensive and walkable. Sprawl is the complete opposite.

The Value of Incorporating Nature in Urban Infrastructure Planning

Catchup with Joaquim Alvarez from the City of Neom

Solar windows: the next architectural revolution?

Mitchell Kosny, Toronto Metropolitan University | Technology is just a means, not an end

Elizabeth Diller | Architecture and the Value of Public Space

Whittier, the town where 85% of the population lives in the same building

The underground city of Seattle, the city that rebuilt on top of itself

Infrastructure Shaping Cities for the Better

Cities that have been destroyed and rebuilt after a war

Ping An Finance Center, the financial and engineering giant

Is it feasible to use wood in major constructions?

7 stadiums that have reemerged…with rather different uses

Global smart cities spend to grow by 2025: Inside what it takes to build a smart city

Elengubu (Derinkuyu), the underground city that was home to thousands of people

Nusantara, the new capital Indonesia is building in Borneo so it can leave Jakarta

Willis Tower: a giant with numerous records and an interesting history

Biomaterials: do they have a place in smart cities?

How smart sewers are helping to create healthier and safer cities

Climate-resilient architecture: this is how we will protect cities

The Colosseum, putting on shows for over two thousand years

Future of Infrastructure - A podcast with Jeremy Goldberg

The Chrysler Building: a look at one of the finest examples of Art Deco

Burj Khalifa, the tallest skyscraper in the world